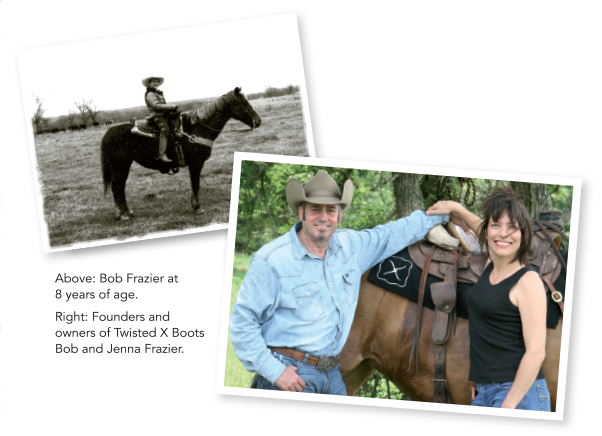 My first boot experience was when I was three years old. It was early Christmas morning; I snuck through the house and approached the Christmas tree. Under the tree was a small pair of cowboy boots.  I took them and went back to bed and placed the boots on my chest and went back to sleep; at least that’s what I’m told.

As a small child I would go to my parental grandfather’s closet and put his boots on; of course they were too large for me.  I would do the same thing in my maternal Grandfather’s closet, as well as my father’s.  I would stumble around until a grandmother or mother would make me take them off. It became customary for my paternal grandparents to give me a pair of boots for my birthday, and my maternal grandparents to do the same for Christmas. I’ve had at least two pairs of new boots, per year, for almost 60 years.

I came from a cattle ranching background.  Both my mother and father were ranch raised and the ranches stayed in the family until they were sold to settle estate issues in 2004. I participated in football (American Football), baseball, basketball, and track, from elementary through high school.  My college years I played baseball, ran track, and rode rodeo. I continue to ranch, compete in cutting, team penning, and cattle sorting events.

In 1973, upon college graduation, I know I don’t look or sound like that’s possible, especially when you hear I was a pre-med student, I was hired as a junior rep selling western clothing. To make ends meet, I picked up Laramie Boots, a small company, as a side line. In 1977 I went to work for Justin Boot Company where I was a sales rep for 22 years and was on their product styling team for 20 years. I went into management in 1999 as VP of Sales, Marketing, and Product Development.

In 2001 I retired and later went to work for Ariat International to build them a cowboy boot line and hire an experienced cowboy boot sales team. Soon after, Ariat hired Jenna as a sales person. In 2005 we left to develop Twisted X. Jenna took care of many details while I developed our boot line.

I have three children, four grandchildren,and my parents are still living at 92 and 90 years old.  They’re a handful; that would be my parents.

My passion is still boot making. Making quality, functional cowboy boots without interference from someone who doesn’t have a clue or whose first priority is profits over quality is a joy. Quality sells boots.